It is normal, even healthy in a republic, for opponents of a sitting President to be vocal in their opposition and hold him accountable for his missteps, mistakes, and potentially immoral policies.

It is not remotely normal or healthy for so many people to be literally driven insane by the mere existence of supporters of a sitting President.

Whether or not you are loyal to Trump, you have to admit that the vitriol against his supporters is highly disturbing. Do people not realize he was democratically elected by people who believe strongly that he would have a) been an infinitely better President than Hillary Clinton and b) care more about jobs and national security than they do about pronouns and microaggressions?

Anti-Trump Americans don’t just hate Trump. They hate anyone they view as responsible for his presidency, which happens to be a lot of Americans.

Still, with all those screaming at the sky, vandalizing Trump’s Hollywood star, and pretending we live in Nazi Germany, this chick still stands out as a complete nutjob: she rammed into a man’s vehicle, and narrowly avoided hitting the man himself, all because he had a Trump bumper sticker.

MRC TV has the story:

“I could hear her screaming out of the car or something, so I thought man maybe something’s wrong with my car,” said the male victim, who is remaining anonymous. “I get out, all of a sudden I hear, ‘You’re racist,’ [and] a bunch of cuss words.”

“She said, ‘You voted for Trump?’” the man said in a statement. “I said yes. She called me a racist and several other names.”

“It was just non-stop,” he told CBS News.

Not only did she hit the man’s car, but she appeared to be aiming for the man himself.

After the woman berated him about his sticker and he started filming on his phone, she got in her car, rammed into his bumper, and smashed into his door, hardly missing him.

“She bent my door and I had to lean back to avoid getting hit,” the man said. “She also hit the side of my car.”

Thankfully, because the man managed to capture the incident on video, the woman was tracked down and charged with vandalism and a hit-and-run in addition to an assault with a deadly weapon charge.

She was willing to destroy her own life, and even take another life, all because she couldn’t even handle being on the same road as a Trump supporter.

I don’t think “snowflake” is the right term anymore. These people are timebombs! 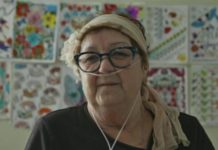 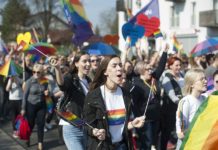 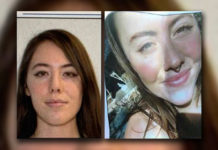